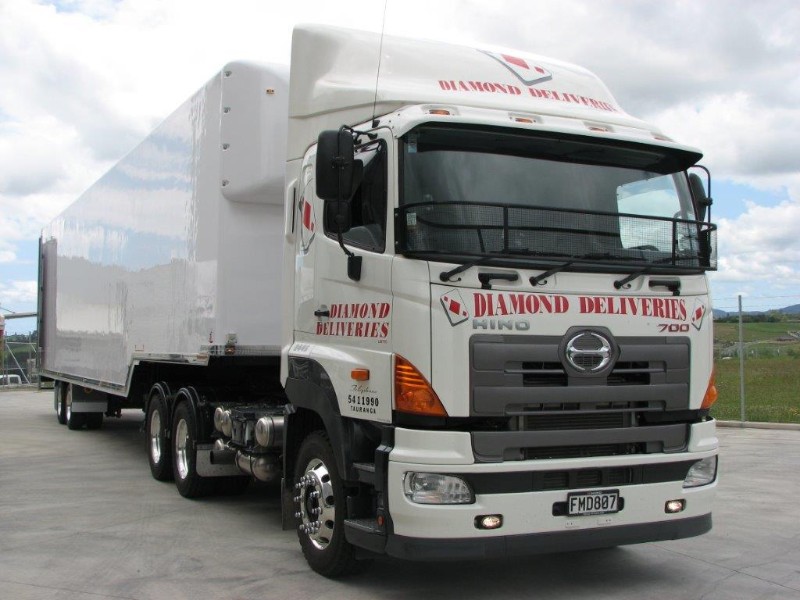 Despite being in the road transport industry for more than 40 years, Ian Baker of Tauranga-based Diamond Deliveries is still delivering La-Z-Boy chairs rather than putting his feet up in one.

The owner of the successful furniture transport business has seen it all since he started out based in Auckland driving a Mobil Oil TK Bedford truck in 1976.

He transferred to the Bay of Plenty in 1982, bought his first Mack truck and became one of Mobil’s fist owner drivers.

“Back then the idea of owner drivers meant Mobil would supply the fuel and leave the drivers to it – how we got it to service stations was up to us,” Ian says. “There was good money to be made, virtually no regulation, no such thing as log books or anything like that, but all the responsibility sat with the owner driver.”

Ten years later, Ian decided he’d had enough of life on the road and decided to hang up his keys.

He liked the idea of a different type of business such as running a motel but was lured back when Diamond Deliveries came up for sale.

“It was just a part time scenario at first – three days a week, two trucks, two drivers and five customers – when I bought the company.”

Under Ian’s stewardship Diamond Deliveries dabbled in Wellington and Auckland and at one stage had 43 staff.

Nowadays the focus is back in the Bay and the family business – owned by Ian and wife Liz with daughter Vanessa also an integral part of the team – boasts 14 vehicles and 25 staff.

It retains its niche of delivering furniture from manufacturers to retailers and from retailers to the end user with Morgan’s – the maker of the iconic La-Z-Boy – as one of its biggest and most enduring customers.

“I’ve always prided myself on providing a reliable, clean and efficient service.”

While that hasn’t changed over the years Ian says he has seen massive change on and off the road in in the industry particularly in technology, regulation, environmental issues and traffic.

“There were hardly any regulations when I started out but now compliance is huge. Traffic volumes have gone crazy – we had visions of doing 10 private deliveries a day in Auckland but struggled to do five because of traffic,” Ian says.

“And when the RMA came in, I would be making deliveries for Mobil and look up to see someone watching me with a camera to monitor spillage – which probably actually caused more spillage than it prevented.”

Ian is clear on the positives and negatives of the industry he has been part of for more than four decades.

“Cowboy operators – that’s my number one gripe. What they do on and off the road gives the rest of the industry a bad name and they are often undercutting the good guys in our game,” he says. “But overall it’s a great industry that has served me well.”

Ian credits the support of National Road Carriers, of which he is a long time member, with making the industry a better one to be in.

“It’s a real positive to have them there as a back stop to provide advice, to go to with questions or issues, to provide valuable information – even at 66 you’re never too old to learn.”

Ian also values the fuel discounts his NRC membership provides and the availability of insurance and other financial benefits and services.

“At the end of the day they are saving me money. It’s hard enough to make a dollar so any dollar you can save is worthwhile.”