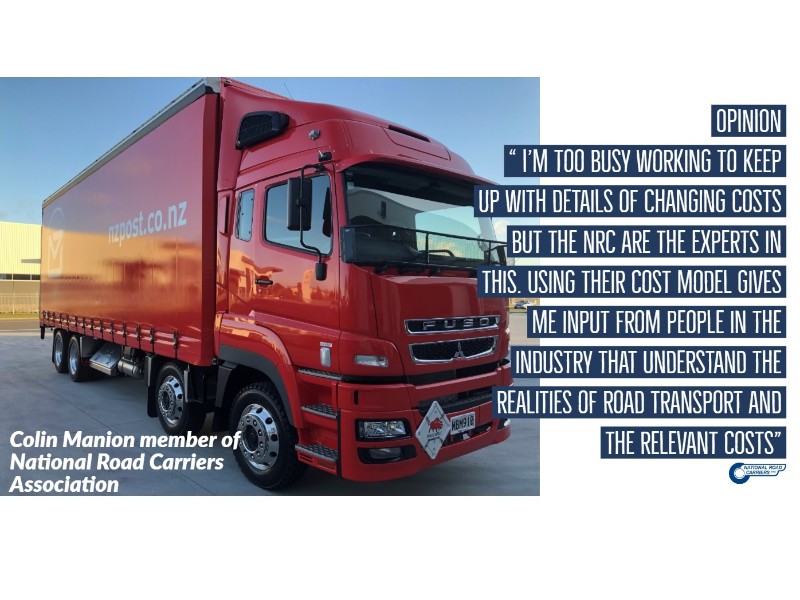 Taumaranui owner driver Colin Manion turned to NRC to help him inform his latest contract negotiations. Colin bought his first truck in 1979 and has since contracted to his local dairy company as well as the likes of Quality Bakers and the Apple and Pear Marketing Board. But he says, despite many years in the industry, he is no accountant. Having recently purchased a new truck to replace one that had racked up 1.3 million kilometres, he needed help to get his costings for the new vehicle right.

NRC’s cost model is the country’s most up to date, predictive cost model programme for commercial motor vehicles. It has the ability to predict annual costs up to 12 months ahead for any size of transport fleet.

As an NRC member, Colin had instant access to the tool online, at no cost, and decided he was much better off using the NRC’s up to date cost knowledge. He entered the required information about his business (which typically takes about 10 minutes) and sent it to NRC to put through its cost model programme.

The beauty of the NRC’s cost model is that it is very flexible and adaptable – it works for single vehicles or fleets – and the NRC team do the work with it to produce a result for members. NRC Executive officer Jason Heather says in Colin’s case they were able to run six different scenarios to provide exactly the information he was looking for.

Within a week, Colin received a report with easy-to-read graphs and detailed figures which he could use to inform his contract negotiations. Colin was impressed that the report picked up on a couple of cost elements that he wouldn’t have otherwise considered, despite almost four decades of experience in the road transport industry.

He was able to use the report as something tangible, robust and independent upon which he based his contract price, providing the report his employer as part of his rationale. His negotiations were successful and he secured the contract he was looking for in his new truck.