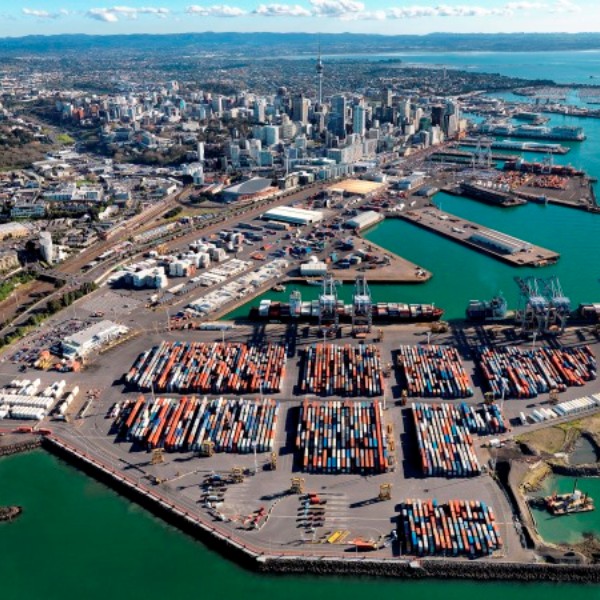 On Saturday the Rangitata River overflowed its banks, and cut Timaru, Dunedin, Queenstown and Invercargill off from the rest of New Zealand.

(Of course, the only other road, on the West Coast, was closed also, and still is). Today the South Island is effectively cut in two.

All Road, and the single rail, links were lost to late spring flooding.

Not an unusual situation given comparisons to floods of 1996 which did the same but worse at the same time of year.

access again on Tuesday, after losing connectivity for three days.

New Zealand has an extremely fragile transport network, built on earthquake and flood-prone islands a long way away from our neighbours.

Despite the proven, and recent record, failures (anyone remember Kaikoura??) the “Move the Port” brigade in Auckland reckon it’s a good idea to move 150 kms away, across slip prone country, and over a steep range of hills to an undeveloped port, too small for the task, and next to a strategic oil refinery. What could go wrong?

I have read the barrage of publicity from the Move the Port Brigade, roping in respected and knowledgeable Aucklanders who have one thing in common: While they are knowledgeable in their own fields, they know little about logistics. It’s a bit like asking a brain surgeon to fix your computer.

They’ll have a valid opinion, but no knowledge, and they’d cock it up.

Of course, it’s a “nice idea” to have Cafe’s along the waterfront, but given the consequences of that it does not become a “good idea” until all of those consequences are known and mitigated.

Personally, I am against the Port location. However, I would benefit personally if it were moved.

There must be people who would benefit financially from this and who want it to happen, and that’s where I suspect the support campaign must get its money to run its campaign from.

Personally, I cannot understand the misinformation accepted by people with so much knowledge about other things.

The NZ First Study (as Part of their coalition agreement, and run by a Northland Mayor and the CEO of KiwiRail) makes some pretty bold assumptions, and creates a divide amongst the people on either side of the argument. Most of those for the move are captivated by the image of being able to wander through trees and parks on a greater café lined boulevard, with a gentle breeze wafting through the air.

That is in complete contrast to the notion of regaining the value of the Port by high-intensity development. (And don’t forget the sightlines from the Museum to the Harbour which will limit any development)

The assumption from many that KiwiRail can do this, with the study quoting 70% of all traffic on rail (which incidentally means 30% on a shitty narrow winding road), is rather flawed, given that after 20 years of MetroPort they just cope, despite doing a very good job with what they have. To assume that they can handle three times the volume in 10 years is flawed. (The motorway capacity increase of one additional lane each way from Manurewa to Papakura in not complete after 5 years)

The idea that, according to one Herald article, creating a huge railyard at Kaikohe, a further 100 kms north of the Port is going to happen, let alone be a panacea for the social woes of Kaikohe seems somewhat farfetched.

The notion that the tunnels will disappear, and that a single-track railway, yet to be built over marshy shallow tidal areas, and through farmland, around some steep hills, and immediately adjacent to the newly developed residential One Tree Point Marina, will cope with three times the volume as Tauranga seems equally farfetched.

Ports and Railyards are very noisy, all day and night, unlike supertanker discharges.

To transfer all of the cargo, to an area of north of Auckland to a 30-hectare rail yard, yet to be built, over a single-track line, running about twenty trains each way (40 trips) per day, seven days a week seems farfetched.

To think that somehow all of the jobs at Ports of Auckland, currently well more than 1000 when the other employers are counted, but misrepresented as 500, will disappear without any effect on those families in largely South Auckland seems unrealistic. It will create a far greater social problem than the mythical Kaikohe creation.

More than 6000 people have daily access to the Port in Auckland currently, including all of the truck drivers who collect from there.

Traffic volumes around Auckland would increase substantially, not decrease. Trucks make up 6% of traffic. Remove them from the short section from the top of Grafton Gully to the Port, but allow for a large increase to the new proposed Kumeu Marshalling and Shunting yard, but also increase the number, as more will be required. There will be no change to the trucks delivering into the City, except there will be more if there is a high-intensity commercial development of the Port area to “unlock the value of the Port”.

Remembering of course, that Dangerous Goods cannot travel through the Waterview tunnel.

All prices will go up, not come down. Families in heartland Labour South Auckland will pay more as their jobs evaporate. But I guess they are just social collateral.

When Auckland prices go up, so too do all of the prices throughout the country, as the volume of the nation’s largest city offsets the remoteness of the rest of the country. Efficiency in Auckland is felt in Invercargill, but so too are cost increases and inefficiencies.

Will we succumb to the most blatant political bribe in New Zealand’s history, or will logic prevail?