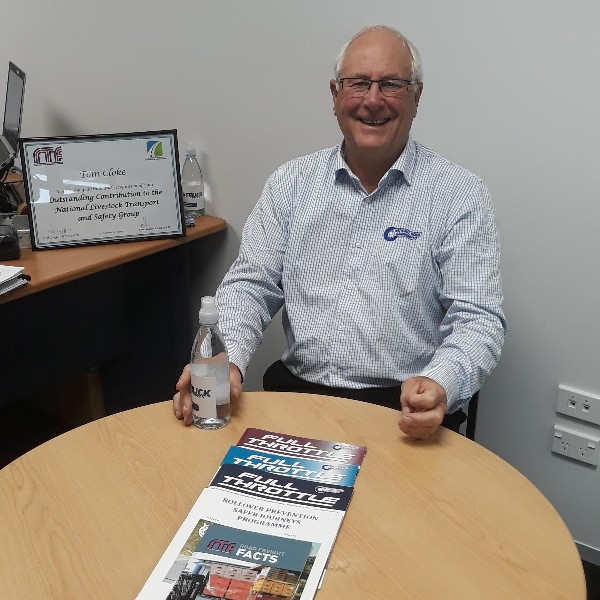 Man of many hats Tom Cloke is taking off one of them and will step down from being a NRC executive officer in February next year.

Tom will still wear his Taranaki Regional councillor hat – he is now into his seventh three-year term – his Granddad of eight hat, his farmer hat – and he may even put back on a wide-brimmed hay contractor hat he’s worn in the past.

After 30 years of service with road transport associations, most recently NRC when the Taranaki-Wanganui association came under the NRC umbrella, Tom has decided it is time to move on.

“All the people I grew up and went to school with are getting out of the industry, so it’s now time to move on. I always thought as my generation move out, I’ll move out too. The younger generation needs younger thinking.”

NRC CEO David Aitken says Tom has made a great contribution to the industry over his nearly 30 years. “Tom has built up a reservoir of knowledge and expertise over the years and is a familiar and supportive face to many in the industry. He has earned a huge amount of respect and mana with many achievements on behalf of the road transport sector. His contribution as a councillor has been exceptional.”

True to his supportive nature, Tom will spend a month handing over to his replacement Richie Arber who will start in the role on 27 January.

Richie brings industry knowledge, connections and experience. He has worked in the transport industry for 35 years, the last 18 as a regional manager for lease and rental sector heavyweight, TR Group Ltd.  His earlier years were spent driving, dispatching and in sales, so he has a broad knowledge of the industry he describes as is "his other family".

Richie has four children, with a fifth one (a daughter) due before the end of 2019, so it is no surprise that he says his interests are his family first and foremost … closely followed by motorsport.