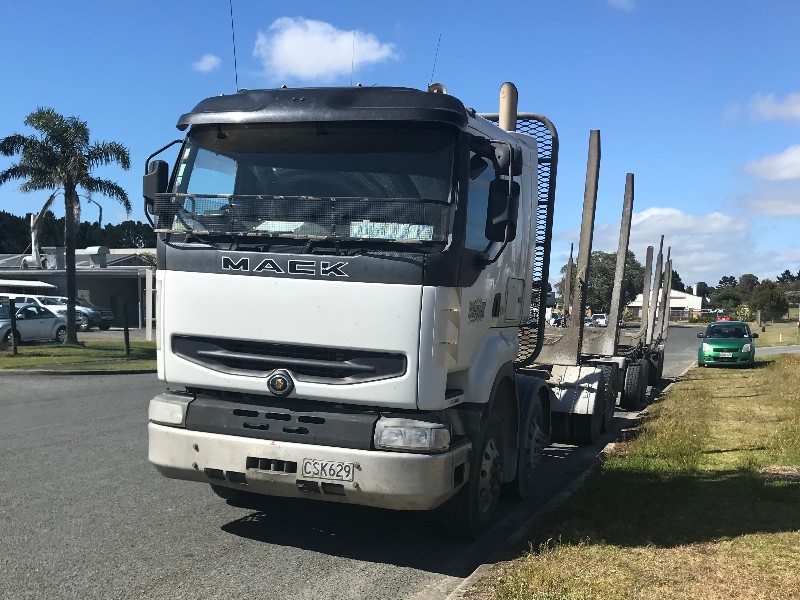 Third generation truckie Ian Newey reckons he was destined to drive, own and operate trucks. “It’s in the blood,” he says. “I grew up in the passenger seats of trucks. The Newey name is the third generation in the industry – it’s what we know.”

The new 41-year-old National Road Carriers board member enjoys the challenge the transport world brings. IK and SM Newey Transport Ltd, the Northland business he owns and operates with wife Shelley, has 13 loggers – two Hino and 11 Mack trucks – and 16 staff.

“We’ve got our own workshop – but we also have a great relationship with Truck Stops Whangarei. It’s about keeping it simple – we don’t want a whole lot of brands in the fleet. Keeping the balance sheet in order is always a challenge. The latest Mack Trident unit is $510,000 to get on the road so having a good financier – as we do in Westpac Equipment Finance – is paramount.”

Mack ownership runs in the family with father Keith and grandfather Brian being Mack owners. Brian owned the grocery store in Colac Bay, Southland, and had a school bus run with a Mack bus. In the mid 70’s Keith worked for Smith and Davies in Northcote before buying the Kaiwaka Service Station in 1982 and then winning a contract from Golden Bay in 1989 to cart cement from its Portland plant in Whangarei all over the North Island.

“My whole career has been forestry,” says Ian. “When I left school at 16 I cut and stacked posts in the bush and then ran a few logging crews as a young feller. I enjoy logging – you get to see a lot of rural parts of New Zealand – and you’re not stuck in Auckland traffic.” After his “overseas experience” Ian returned to New Zealand and started his business in 2002 with one truck aged 24.

“The plan was only to be an owner-driver,” he admits, “but I’m not one to miss an opportunity – and the opportunities have kept coming.” Just three months after buying that first truck he met Shelley, now his wife and business partner.

As their log trucking business was growing Shelley worked as a human resources advisor at Refining NZ at Marsden Point. These days the self-described “full of energy” Shelley shares her time between company directorship and raising the couple’s three children Blake (11), Luke (8) and Jess (6) who are all hockey players.

Shelley gave up her HR role early 2017. “It’s given her more work-life balance. We work side by side – we have very similar goals and all the decisions are joint.”

Ian and Shelley have great support from their families, who live nearby. “We lease the yard from my parents. I’ve been mentored by my father. I look up to him and he inspires me but he’s also a mate and we have a lot of laughs. He still loves driving and will take a truck into Whangarei if needed.”

Six years ago, for his Dad’s 65th, in front of 150 friends and family, Ian presented him with the truck he had started his cement business with. Ian had found the truck derelict in a field in Foxton and had it restored over two years.

Ian says the NRC board role is one of those opportunities that have come up and he has taken with both hands. “Everyone has opportunities and it’s whether you choose to grab them. I see it as an opportunity to give back.”

It’s not as if Ian doesn’t give already. He contracts to the Northland Wood Council, a regional association of forestry managers, to run its “share the road” school safety programme. “We’ve done 35 schools in the last 18 months right up to Te Kao our northernmost school. For a big school like Kerikeri with 500 students, it will take a couple of days. We teach them about safety awareness around large vehicles and they get to sit in the cab and toot the horn.”

Ian is looking forward to contributing to the board. “There’s a lot of learning to do but I’m passionate about road transport and there are a lot of issues – the state of the roads, sustainability, health and safety to name a few.”

In his spare time, Ian enjoys spending time with the family, a round of golf, and rum racing down the Whangarei Harbour on the 32-foot keeler owned by his longest-serving employee, 67-year-old Bernie Gunson.